Chapter 3: Homie-cide, Life on the Streets

Yo! We were gonn 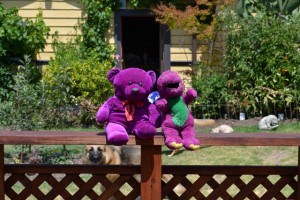 a show Barney the town but dang, those Oaktown peeps done gone crazy. Three homicides in three hours last night! We decided to keep our heads down and hang tight in our crib. Meantime, Travis Ray been doin’ a little research on the web—Duuuuude, watcha think he found out? Floyd ain’t related to Barney! Nope, he sure isn’t! Little purple bear been takin’ us for a ride!

Nopawdy takes the Oaktown Pack for a fool, oh no they don’t. We decided to git ‘im. And to show Barney a thing or two as well—need to drive all thoughts of fluffy pink ears outta his brain…….

…….OK, we think Barney is on the straight and narrow again. We gonna dust him off and send him on to his next stop. Hope his next host is handy with a needle—he had a head wound when he got here—his scalp is kind of disintegrating (maybe that accounts for his delusions of fluffy pinkness). Its a little worse for wear but Mom never took Home Ec so its totally beyond her capabilities!

So, much as we hated to we had to leave Colorado—something about mom has a job and can’t just take off forever. Sigh, we were soooo sad to leave Wyatt Ray. What a baaaaad boy! I just love bossing him around and seeing him pin his ears back and roll his eyes in fear! Man, Wyatt and his pawrents sure got down and showed us the bestest time! We totally dug it!

Pops likes to just get on the road in the Tripawdmobile and put the pedal to the metal so we made it home in two days. But we took a little time along the way to show Barney and Floyd a good time…….Four states in one day! We’ll have to check fur sure but I don’t think Barney has been to Wyoming, Utah, or Nevada before. So here’s the proof!

Here’s Barney and Floyd at the Great Divide Basin in Wyoming. We wanted to stop at the Continental Divide but there wasn’t an exit. Whattup with that?!? 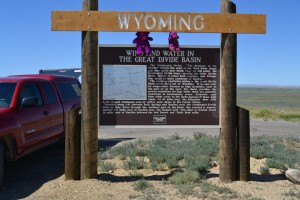 Here’s Barney and Floyd at the Bonneville Salt Flats in Utah! 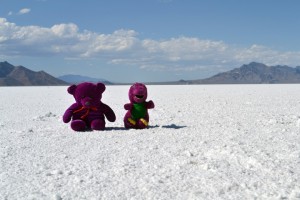 Ooooh, don’t get left behind Barney! 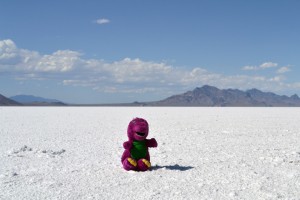 Where the heck did Foyd go???

Here’s Barney at the Gold Country Casino where we stayed in Elko, Nevada. What a great place—three dogs? No problem! We’re thinkin’ Barney has a little problem—he spent all his time in the casino! 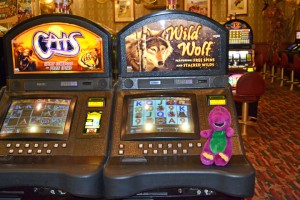 Here’s a dead antelope on the wall at the casino-we saw lots of those on our trip through Colorado and Wyoming but they were all alive…. 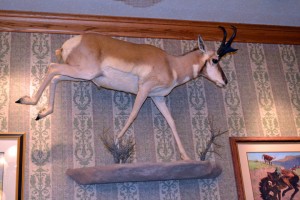 Yo! Whattup wit’ dose I-80 rest stops? The peeps get to play on the soft cool shady grass…… 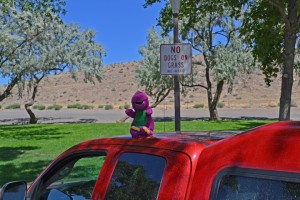 …….and us K9’s hafta pee in the hot sun and dodge nasty poky puncture vine! So. Not. Fair. 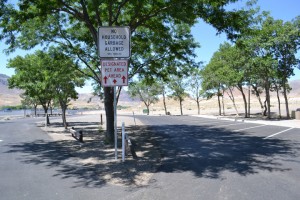 Dawg, were we tired when we got home……. 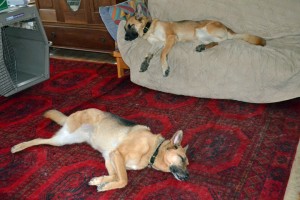 Stay tuned for the final chapter of Barney’s adventures with the Oaktown Pack……….

So, me and the pack went to Colorado last week to visit our long lost homie—Wyatt Ray Dawg. In case you furgot, he 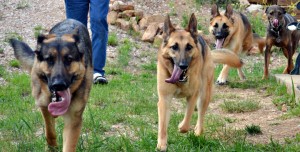 escaped from a life where people tie dawgs outside and never let them in the house and abandon them when they get tangled up in their chains and hurt their legs so bad they need to be cut off. Wyatt spent the first few weeks of his new life with us, before Jim and Renee came to meet him and fell in love with his boyish good looks. Little did they know what they were getting into! Anyway, when we rolled into Jerry’s Acres on a warm Colorado evening, the Oaktown Pack was complete once again! 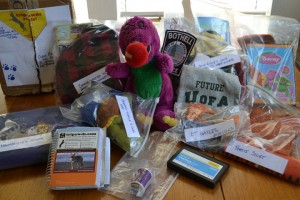 After dinner we got to open a package! It was addressed to Codie Rae and the Oaktown Pack and it was from Rio!!!! O.M.D.! Barneeeeeeeeeee!!!!!!! At long last!!!! Thanks Rio!!!! You R.O.C.K!!! The really crazy thing was we had traveled all the way from Oaktown with this other purple dude named Floyd. He said he was Barney’s long lost cousin so we figured he would be the next best thing. But then we actually got Barney too! So we got to do a good deed by reuniting the two little purple dudes! Yo, were we excited! Mos’ def! 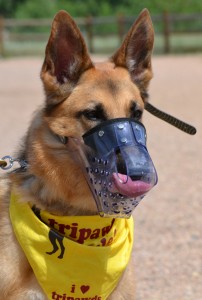 Pawty Time! The next day we took Barney and Floyd to the Third Annual Colorado Tripawds Pawty! I got to show off my new Hannibal Lecter look. Nothing can stop me from levitating but at least I couldn’t make anyone bleed. Barney and Floyd hung out and we met all the cool tripawds that were hangin’ in the Ft. Collins heat. Like Lily and Cotton! Smokey had to show off–hmmmph, guess 4 legs are good for somethin’…. 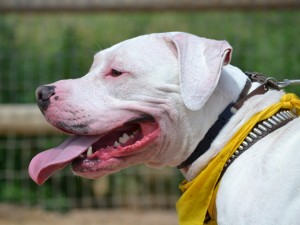 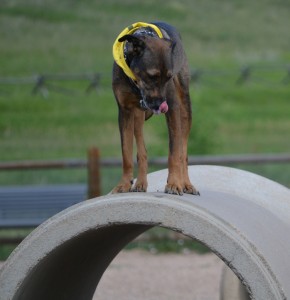 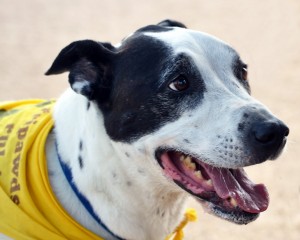 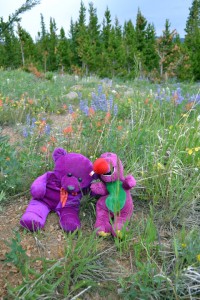 Then we took Barney and Floyd to see the Rocky Mountain wildflowers. Floyd was whispering to Barney the whole time and we could never quite hear what he was saying. Kinda weird. Me ‘n Wyatt ‘n Travis ‘n Smokey were having such a great time playing and chasing rodents and deer and basically driving our pawrents crazy. We backed off from the purple guys and decided to just let Barney and Floyd hang out and get to know one another—we figured they had a lot to catch up on. 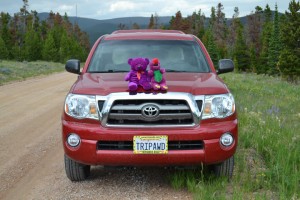 We finally got in a little play time with Barney—Floyd said the altitude was getting to him and he wanted to rest, whatev… 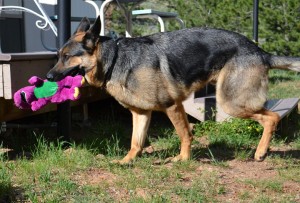 We were kind of tired ourselves so we didn’t actually kill Barney (although that has always been my plan if I was ever lucky enuf to get him), we just roughed him up a little. We thought he knew it was all in good fun. 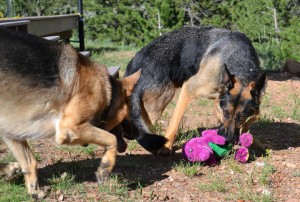 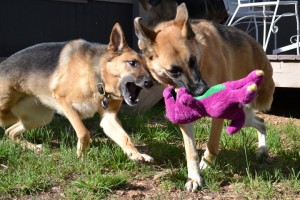 Went to get a drink and all of a sudden Barney was gone! We sniffed around and Yo! There he was! On top of a huge rockpile! 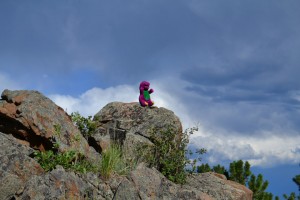 Goody 3-Paws Travis went all Rin Tin Tin and raced up to save him but….. 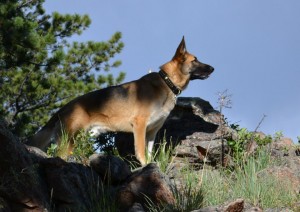 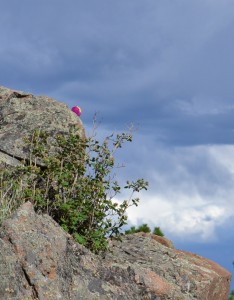 …….it was too late, Barney launched himself over the edge!

But wait, he only fell a couple feet and landed on a ledge! Duuuude, what a loser! We asked what made him jump….but he wouldn’t say, except that it had nothing to do with us……just mumbled something about fluffy pink ears……